Preservation of our Historic Estate

In 1965, Jim Concannon and UC Davis selected three cuttings from this single vine which provided the original plant material for the Concannon Cabernet Clones 7, 8, 11. Today, an estimated 80% of California’s 90,000 acres of Cabernet are planted to the Concannon Clones which descended from this one special vine that is still producing beautiful fruit.

“I believe it is entirely fair to say that through the collaborative efforts of UC Davis and Concannon Vineyard to safeguard the Concannon Clones, we have made a highly significant contribution that helped build the extraordinary success of the California Cabernet Sauvignon winemaking industry.”

Preservation of the Historic, 1883 Winery

Over the course of our ten-year estate revitalization project, we carefully restored our original winery, a California Registered Historical Landmark, which now includes our Tasting Room, Wine Library and Club Rooms.

Every effort was made to utilize all the original materials in its sustainable preservation and restoration:

Dedication of the Concannon History Gallery

On July 25, 2016, John Concannon dedicated the new Concannon History Gallery as a tribute to his father, Jim, on his 85th Birthday.

We invite our guests to grab a glass of wine and enjoy a fun opportunity to time travel through Concannon and California wine history — from its beginnings in 1883 to Prohibition, to the creation of the Concannon Cabernet Clones to the Judgment of Paris, and to the remarkable, present day discoveries in sustainable winegrowing. Three of these rare, Prohibition-dated bottles of Concannon wines on display are also now at home in the National Museum of American History, Smithsonian collection.

Captain Joe Concannon, second generation, introduced America’s First Varietal Wine Label with one of these wines: his 1925 bottling of Riesling as a varietal wine. The introduction of labeling wines using varietal names was a great leap forward for California wines, and this same 1925 Riesling now resides in our Concannon History Gallery as well as in the Smithsonian collection. 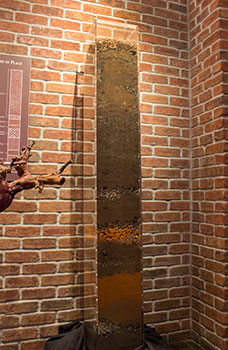 Our Soil Tower and signage helps introduce guests to our Concannon Vineyard terroir and the special sense of place found within the wines they are enjoying.

Preservation of the Historic, 1883 Winery

Dedication of the Concannon History Gallery