Cabernet Sauvignon is not only one of the world’s most popular wine varietals, but also the dominant grape grown in California, covering approximately 90,782 acres according to The Wine Institute. Did you know that an estimated 80% of California Cabernet comes from our Concannon Cabernet Clones 7, 8, and 11? With so much of California’s land devoted to one grape, it’s our job to tell the little known story of California Cabernet and how it came to be through a timeline of events.

Let’s travel back 138 years to 1883, the year of our founding. It was during this time that our founder, James Concannon, imported Cabernet Sauvignon vines from Château Margaux, a renowned growing region in Bordeaux, France to our Concannon vineyards. It is here, in the Livermore Valley, that the roots of California Cabernet were first planted and where our fruitful Mother Vine Vineyard saw its start.

So here we are, approaching the 1920’s and Prohibition. While many wineries closed their doors or repurposed their facilities during Prohibition, Concannon was one of the few wineries to obtain a license to produce sacramental wines. During this time, Captain Joe Concannon was the first to bottle Cabernet Sauvignon as its own varietal wine. You can find three of the Concannon Vineyard Prohibition wines in the National Museum of American History, Smithsonian collection. Post-Prohibition, Captain Joe became a founding member of The Wine Institute, helping to re-create a name for not only Californian, but American wines. 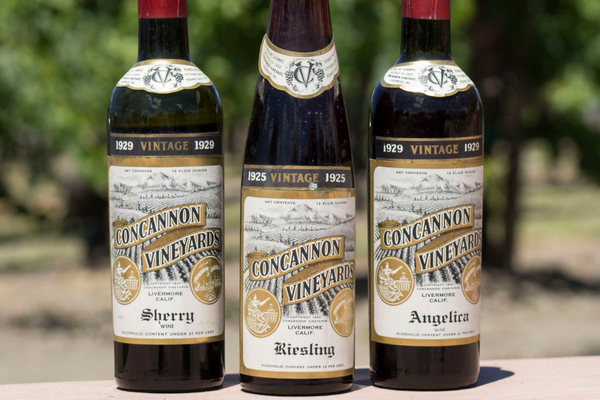 Fast forward to 1965 when third generation vintner, Jim Concannon, collaborated with Dr. Harold Olmo and Curt Alley of UC Davis to clone our high-quality, high-yield, and disease resistant Cabernet Sauvignon vines. Jim and the UC Davis team took three cuttings from our esteemed Château Margaux Mother Vine and planted each on their own. These cuttings grew into what are now known as the Concannon Clones 7, 8, and 11. Cuttings from these three incredible clones were distributed to Californian winemakers after the 1976 Judgment of Paris, an event that not only put California Cabernet Sauvignon on the map, but also triggered increased demand for Cabernet Sauvignon vines all over California.